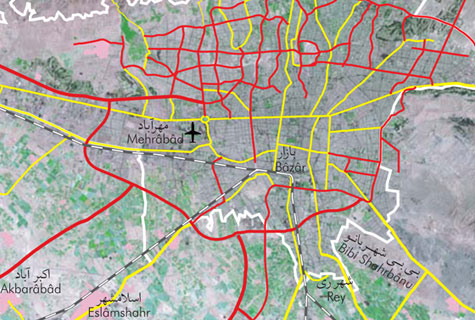 Tehran is located on the southern slopes of Alborz, and in approximately equal distance from eastern (Afghanistan) and western (Turkey, Iraq) borders, sitting on the ancient and famous City of Rey. Tabriz and Mashhad are respectively 550 and 750 kilometers away. Tehran is not far from Khazar (Caspian Sea) with an aerial distance of 100 kilometers. However Alborz and Emâmzâdeh Hâshem passes, with an altitude of more than 2700 meters, must be overtaken on the way from Tehran to Mâzandarân to reach the Sea. Isfahân, the capital during the Safavi dynasty, is 350 km to the south. Today, Iran’s Capital, although far from other big cities of the country, is located in an ancient strategic crossroads. On the one hand it is situated on the route from Anatolia (Turkey) to India and China along Alborz mountains and on the other hand, at the intersection of roads that extend from southern parts of the country along Zagros mountains (Persian Gulf, Shirâz, Isfahân) and from the west (Mesopotamia, Qasr-e Shirin, Kermânshâh, Hamedân). Today, Tehran Metropolis is the most urbanized area between Istanbul and Karachi. These distinct elements, i.e. mountain, mountainside and desert, have formed the region’s
landscape as well as its natural, social and cultural environment: from high to low, from cold to warm, and from summer resorts to winter resorts. Towns and villages are located on the mountainside between these two poles and human activities have followed suit.
Tehran is a mountainside city with an altitude of 900 to 1700 meters above the sea level. Its urban area spreads entirely over the Iranian plateau, on the slopes of a very high and dense mountain barrier, with a peak of 3933 m (better known as Towchal ) which is 2200 m higher than the City’s residential areas. From Qazvin to Varâmin, the view is dominated by the Alborz Mountains, with rivers that are full in springtime and dry in summertime, flowing to satiate underground water tables hidden in the very thick layers of sedimentary rocks (gravel, sand and clay) from the Quaternary.
Multiple aqueducts bring the water to surface that, in turn, flows through irrigation canals and brooks along all streets and avenues of Tehran and many other towns and cities within the province.
Unlike Isfahan, no sizeable river passes through this province’s towns, other than Karaj. In higher parts of the slope, i.e. over 1500 m, it becomes cooler while major water resources in the area have provided for the development of big and arborous (mainly poplar and fruiters) villages. Lower parts, between 900 to 1200 m, have a fertile soil and a gentle slope that permit a productive agricultural activity. In these plains, there are many sources of surface or underground water tables, supplied by aqueducts, flood ways and branched out rivers.
In the south of Tehran and its suburbs, beyond the new airport, the desert begins. Dry and very hot weather in summer and sometimes very cold in winter, make this region seem hostile, although this open and bare space plays the role of a strategic reserve space for Tehran Metropolis and its 12 million inhabitants.
From geographic, natural and human points of view the same desert is the negative of the mountain side and has no significant role in Tehran’s landscape and activities. Qom, with 800000 inhabitants, is closely related to Tehran. It is, however, separated from Tehran by the desert and belongs to a quite different geographic entity.

Leave a Reply Cancel Reply
You might also like
One of the following
where is Tehran?
Darband Tehran