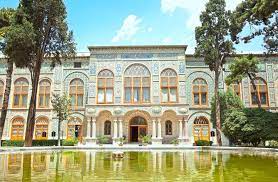 Golestan Palace is one of the exclusive historical complexes of Iran established in different times and for different functions. The name is derived from the Golestan Hall, located in the exterior edifice. The construction of this complex was started in Safavid era. Chahar bagh and Chenarestan were built in the north part of the complex at the time of Shah Abbas I and the royal edifice added there but nothing remained today.

The oldest buildings in Golestan complex are are Marble Throne Iwan and Khalvat-e Karimkhani belongs to Karim Khan Zand period. The palace has been mostly extended during Qajar era and used as the residence of Qajar kings.

After the conquest of Pahlavi I dynasty, a large part of Tehran’s arg such as its fences, Bab-e-Ali entrance gate, the Department of finance, gallery, Tekye Dolat, Narenjestan, Golestan garden and interior buildings were destroyed and this palace becom a center for official ceremonies and used as a residence for presidents and foreign special guests.

There were many various buildings in Golestan Palace in the past, among them interior edifice, Naseri dormitory, the hall of khan-e Maghfur, exterior edifice, Sanduq Khaned edifice, Royal Rakhtdar khaneh can be noted.

Today new functions have been assigned to each part: ethnography museums. a place for preserving the royal remains, library and administrative offices. 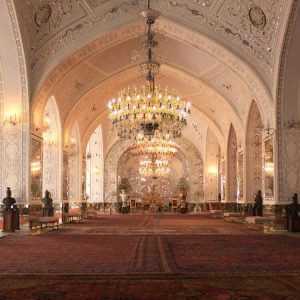